Note: The first race of FormulaProc is the result of my work in #procjam 2021. I will continue improving it so make sure to subscribe to the youtube channel and follow the blog so you don't miss all the action!

FormulaProc is a simulator of Formula-type races; follow the progress of the season as the drivers and their teams make their best to dominate in tracks all around the world.

December 9, 2020: In anticipation of the 2021 season, a quick sprint race was held at Spa-Francorchamps where the teams got a chance to test their new cars and get some experience for their drivers.

Before the results of the race, let’s give a quick look at the teams and their drivers:

Queenscape Motorsports (GER): Their QM21 racer boasts a powerful engine, but it seems to miss a matching braking kit for optimal performance in the corners. We anticipate both Biskup T. (GER) and Jochen A. (GER), their drivers for 2021, to fly like rockets on the track… but will they be able to control their powerful machines under the pressure of aggressive opponents?

Epona Nitro (ITA): The all-time traditional team comes back with a renewed image and their research division has designed a new power unit optimized for top speeds. Kisielewicz K. (POL) and Wichman G. (SWE) will be putting the reliability of this experimental engine to the test.

Majeyaux Automobile (FRA): The French powerhouse is bringing back its powerful engine, which still endures some limitations for maximum speed. Veteran drivers Casalini D. (FRA) and the relatively unknown Simernino D. (ITA) will sure put up a show in the upcoming season.

Slashware Racing: The Colombian team debuts in 2021 with a well-rounded car. Founder Zapata R. (COL) and rookie super start K. Gaburi (JAP) will go down history as their first drivers.

Hatena Motors: Highlights from their 2021 car include a high-tech braking kit that should allow for great corner performance. Wonder driver M. Denzi (JAP) and the veteran Geckinho S. (BRA), coming back after years away from the tracks, will seek to improve their results from 2020.

The Queenscape and Majeaux cars dominated the first half of the qualification, however, crashes for Simernino, Biskup and Jochen would relegate them to start at the end of the grid, with Casalini taking the pole position and giving a chance to both Epona Nitro drivers to start behind at positions #2 and #3.

The Hatena and Slashware cars had a distinctive lower performance compared to the pole-takers, but in the end, the Japanese team prevailed, with the debutant Colombian team sticking to positions #6 and #7, only in front of the crashed cars. An interesting setup in the back, how much will they be able to contain the powerful Queenscapes? will the German team have the patience to chase the slower cars into the front positions?

Overall a bad day for the favorites Queenscape. Hopefully, they can make a good show during the race.

The race started with Kisielewicz #2 charging directly at Casalini, only to hit a wall at La Source and be taken out of the race far too quick, leaving Casalini free to fly away from the slower Hatena driven by Geckinho and stay in that position for the rest of the race.

Both Queenscape cars, as well as Simernino chasing from the back, were stopped in their tracks by the slower Slashware racer of Gaburi. Simernino pushed on, only to crash near the Raidilon while trying to overtake Jochen.

A gap developed between Geckinho (#2) and Wichman (#3) who was, in turn, being chased aggressively by Zapata, whose slower car would end up being surpassed by Denzi’s Hatena on his way to meet his teammate. Meanwhile, both Queenscape cars still couldn’t manage to pass thru Gaburi, who was doing great contention work while her teammate rode far in the chase for #4.

The Queenscape cars finally managed to go past Gaburi by the end of lap 1 and after the first corner. Then Wichman, who had had a great race so far, crashed near Raidilon (which had already caused Simernino his race) allowing both Hatenas to get positions #2 and #3.

With Gaburi out of the way, the Queenscape rode to attack Zapata’s SWR01. But Zapata didn’t yield and Biskup had to give out many overtaking efforts including one at Blanchimont which almost costs him the race. However, he took the risk at La Source (where Kisielewicz crashed at lap 1) and finally passed thru Zapata, putting his engine on fire he quickly passed Denzi’s Hatena, while Jochen would still be kept away by Zapata for some corners until he was finally overtaken in the double gauche.

The struggle for #3 was tense during the last lap, as Denzi recovered his position and finally surpassed his teammate Geckinho, for the Hatena to finish #2 and #3, followed by Queenscape’s Biskup and Jochen, and the Slashware’s Zapata and Gaburi closing the list of finishing cars.

Casalini dominated the race at spot #1 from start to end, making us wonder what would have happened if the Queenscapes (and his teammate) have had better luck during the qualifiers. The worst part of the race went for Kisielewicz, for which we had great hopes after what we saw in the qualifiers (and the Epona racers seem to be in great shape, based on the performance we saw from Wichman).

And that’s it for this exhibition race! we can’t help but wonder what amazing things the 2021 tournament will bring! We’ll see you soon at the Bahrain Formula Proc Grand Prix! 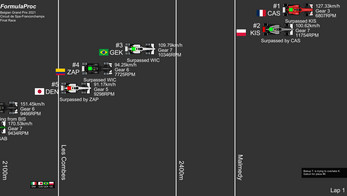 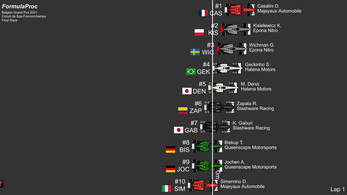 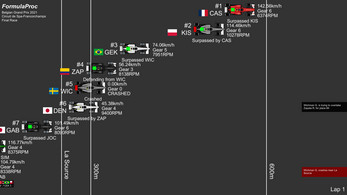