A roguelike game inspired by Spelunky.

I keep coming back to this game but I find that no matter what device I am playing it on, I frequently get a problem of one direction input being turned into 2 inputs. So like I'll press a direction one time but every now and then it moves 2 spaces, which sometimes gets me killed. I think it maaay be times where I perhaps held the direction button a fraction of a second longer than usual. If so perhaps there is some kind of cooldown between button presses that could be modified? Not sure, but so far I've experienced the same issue on several different computers and 1 laptop.

That being said..... I love this game but whenever I try to get serious with it and attempt to beat it I end up dying at some point due to moving farther than I intended to and that kills my motivation to continue.

that's a shame; I'll check about this tho I don't recall it being reported previously (this one shares the same input system from JSRL so Rainy Day and Emerald Woods probably would also have it). I'll see if the repeat rate can be tweaked.

Is there any way to download an offline version of this?

Not for now but I'll keep this in mind for next version!

Thanks that would be amazing. I have noticed that sometimes (especially in WiFi) the game would interpret one button press as two. This would occasionally make me take an extra step towards enemies. I'm assuming it's a latency problem so I'm hoping an offline version would resolve it. I really want to play this game all the way to the end but it gets a little frustrating when I take an extra step towards my death  =p

I really love this unique take on rogue. Thank you!

(if you could implement a way to toggle the music in a future update that would be great!)

Sure thing! Thank you!

good execution, a bit of challenge, and the backstories are great. 11/10 from me!

I'm having fun with this. Good effort. For some reason it doesn't run in Chrome, though, only in Firefox.

Also, it'd be nice to be able to skip the tutorial level. I've done it 8 times, I don't need to keep doing it. :P

thanks! It's weird that it's not running in Chrome because that's what I use. Is there any error in the console?

Also the tutorial should only be enforced once... is this happening in the same machine? Might be an issue with local storage permissions.

Yes, same machine. In Chrome there isn't an error or anything, just the whole screen goes black.

I'll try on my other pc and see if the same thing happens.

What version of chrome is it? do other JSRL games work (see for instance https://slashie.net/jsrl/ )

This is great! Love the music and aesthetics. 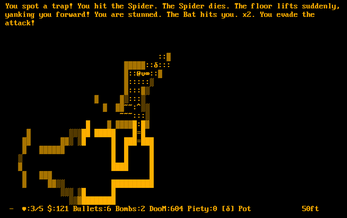 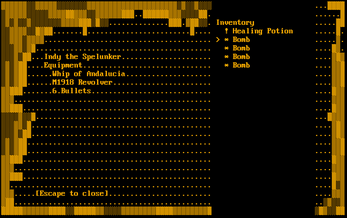 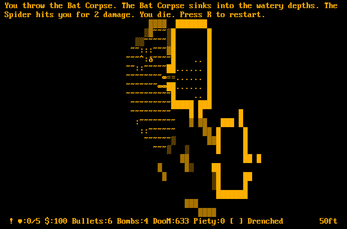 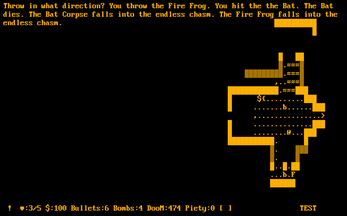